Roberto de la Mota grew up among the barrels at Cavas de Weinert in Mendoza, where his father, Don Raúl, was the legendary figure behind the 1977 Estrella de Weinert. Listen to us chat about what he learned from his studies in France, why Argentinian white wines are underrated, the secrets of making great Malbec and the differences between Luján de Cuyo and the Uco Valley.

Check out our portfolio from Mendel

An interview from the drinksbusiness.com:

Winemaker at Mendoza’s Mendel Wines, Roberto de la Mota, believes that with its high altitude, Argentina produces Sémillon with greater natural acidity and ageing potential than styles made elsewhere in the world.

Speaking to the drinks business at Mendel’s winery in Luján de Cuyo, de la Mota said that conditions in Argentina produced a unique style of Sémillon, quite unlike those found in France or Australia.

“In Argentina, the place, the soil and the altitude contribute to a different style of Sémillon,” he says. “The wines we produce here have a lot of minerality and the wine has great ageing potential as the acidity is very high.”

Mendel has been producing a Sémillon since 2009, sourcing grapes from 70 to 80-year-old ungrafted vines from three different sub-regions of the Uco Valley: Altamira, La Consulta and San Carlos.

The grape variety itself was brought to Argentina in the mid-19th century by Michel A. Pouget, a French agronomist, who had been hired by the Argentine government. Initially planted for high volume and bulk wine production, it was once one of the most dominant varieties in Argentina, but has since been the victim of vine pull schemes. It is now principally used in blends and also to make base wine for sparkling.

With 703 hectares planted in Argentina, according to the latest surface report, Sémillon is some way behind the likes of Pedro Gimenez, Torrontés and Chardonnay in terms of area under vine.

“We have the potential to make great Sémillon here,” said de la Mota, who said that in the UK, the Wine Society had been distributing his Sémillon since he started production of the variety.

“In 2009 there were only a few producers making Sémillon at a high level, now there are between 10 and 15 producers who are using the variety to make high quality wines,” de la Mota noted.

Between 15 to 20% of Mendel’s Sémillon is aged in new French oak, with the percentage altering depending on the grapes and their level of ripeness, according to de la Mota.

He revealed that he has also started making wine from Chenin Blanc, which has suffered a similar fate to Sémillon in Argentina.

“These grapes are part of our history and traditions, and over the years, we’re lost a lot of vineyards planted with both of them. It’s important to maintain what we have left,” he said. 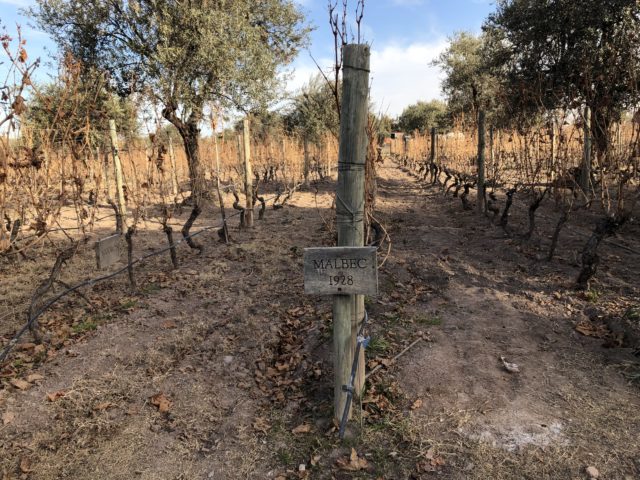 Mendel’s first wines were a Malbec and a Malbec-Cabernet blend. The producer sources grapes from a Malbec vineyard next to its winery, planted in 1928, and since 2009, began using a third variety in its red blend called Unus.

de la Mota explained that the Petit Verdot, now used in the blend, was sourced from massal selection vines planted at Château Margaux and brought over to Argentina in a suitcase in 1994. “We probably wouldn’t be able to do that today!” he joked.

Tasting through a vertical of Mendel’s single varietal Malbec dating back to 2006, de la Mota noted that while differences between vintages are not so marked in Argentina as other countries, “if you maintain a style, then you can certainly find differences in the wines”.

“There aren’t many old Malbec vintages in Argentina, in general, people do not tend to keep bottles,” he said, recalling how on a recent trip to Bordeaux, he uncorked a bottle of Malbec made by his father Raúl in 1977, which received great praise from those who tried it.

“It demonstrated how we have a very good capacity for ageing,” he said. “In terms of ageing, there’s a difference between a good wine and a great wine. A great wine is not just one that can surprise you, but one that has the ability to transcend time.”

Check out our portfolio from Mendel